ADMISSION TO ALL EXHIBITS!

A Retrospective on the Caricatures of Native Son Frank Willmarth 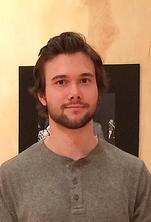 "Vince and Carolyn [Tolpo] have experienced "Art Osmosis" living in their home studio atmosphere where drawing, painting, sculpture, and art philosophy discussion is a daily diet."

March 11, 1965 edition of the Barrington Courier-Review

This quote from an article discussing an art show by the Tolpo teens Vince and Carolyn poetically describes the Tolpo family's busy and productive years in Barrington. Carl Tolpo and his wife Lily were both professionally trained artists who had developed a positive reputation and successful business in the Chicago art community. By 1955 they could afford to buy a niche chunk of land and build their own home and studio complex. The home quickly became a productive center for Carl to work on his commissioned portraits, Lily to paint and sketch, and for both of them to begin exploring sculpture as a serious medium. Their three children, Tina, Carolyn, and Vincent all went to Barrington High School and were quite involved with theater, baseball, and the Broncettes. Carl recieved national acclaim for his giant depictions of Abraham Lincoln, which can be seen on the Barrington High School campus, outside the Lake County Courthouse, and inside the historic Ford's Theatre where Lincoln was assassinated.

In this exhibit are featured many works that present an intimate look at a family whose creative instinct seems boundless. It includes sculptures, paintings, newspaper articles, and sketches, most of which have never been exhibited outside the family home before, providing an excellent opportunity to understand the exciting lives of a local family. The Barrington Historical Society would like to thank Vincent Tolpo for the donation of almost all of the works on display. 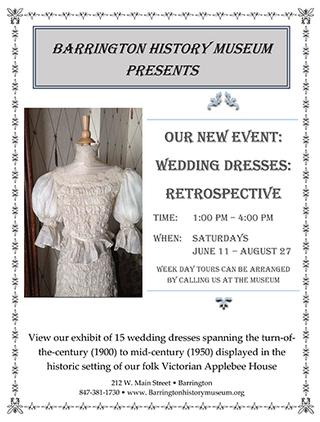 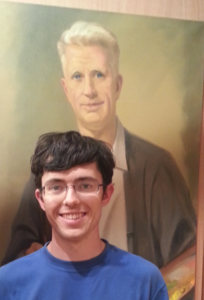 Linda Brown is a retired Palatine elementary classroom teacher who lives in Lake Barrington.  She has volunteered at the museum for six years in various roles starting in education and most recently in curating the Wedding Dress exhibit.  She leads the preschool programs and helps out occasionally as a schoolmarm.  This is her second year on the Board of the museum.  She finds devoting time and energy to local history and specifically the Barrington History Museum very rewarding.

Ever since I can remember I have always had a passionate interest in history. From antiquing with my relatives to visiting historical sites and landmarks on family vacations I developed a love for history and the stories that it told. I knew from a young age that I was going to pursue my passion and seek a career that I would never tire of.

After graduating from Barrington High School in 2011 I began my collegiate career at Harper College in Palatine majoring in History. I received my Associate of Arts Degree in 2013 and then transferred to Illinois State University where I would complete my History degree. Throughout my college career my interest for history continued to increase as my knowledge was broadened on the subject. I had some great experiences at ISU including time spent doing archival research at the McLean County History Museum in Bloomington, Illinois.

I am an avid reader and believe in the power of books. Reading has greatly increased my knowledge as well as my appreciation for world history. I believe that reading has helped me become a much more tolerant and accepting individual through expanding my knowledge about the history of people, places, and cultures across the globe. I was ecstatic when I was given the opportunity to become a part of the Barrington History Museum and finally start to cultivate some first-hand experience in a setting pertaining to my degree in History, and I look forward to all that the Barrington History Museum has to offer me..

Kyle Dockery is a 6th generation Barrington resident and 5th generation student at Barrington Schools. He graduated from BHS in 2011 and went on to study history and art history at Lawrence University, graduating in 2015. Kyle hopes to find a career in the museum field, ideally working with works of art, so curating the exhibit Carl and Lily Tolpo: Art Osmosis was an excellent opportunity.

"Frank “Pancho” Willmarth was born right here in Barrington in 1906. After attending the University of Missouri as a journalism major and writing for a humorous newspaper during his time at the university, Frank headed west with hopes of pursuing a career where he could put his artistic talent to use. His travels took him all over the United States where he would sketch the people and the places that surrounded him where ever he was.

The first sketch he sold was after a football game in Salt Lake City, when his date never showed up he decided to sketch various aspects of the game and sold them to a local newspaper for a dollar. He was now a paid artist…. Frank’s true success would be realized in California.

Though still travelling throughout the state to sketch caricatures at fairs, carnivals, vacation spots and college campuses, his first major opportunity came in Los Angeles. Frank was a very kind and likeable man who got along with most people he met his sense of humor was contagious. This incidentally led to a great many connections, and an opportunity was given to Frank to sketch the who’s who in Hollywood for the Brown Derby Restaurant.

The Derby’s walls were lined with sketches of famous celebrities that would frequent the restaurant during the golden age of Hollywood. A great deal of the Brown Derby’s caricatures were done by Frank himself, which allowed him to meet some of the nation’s biggest stars.

His first job for the derby was to sketch Mae West and Rocky Marciano. Later on in his career he would be hired by the San Francisco Press club to sketch the club’s many guests who were not only Hollywood celebrities, but foreign diplomats, U.S. presidents, famous authors, and the occasional astronaut or FBI agent. Frank had the opportunity to get to know some of the world’s greatest individuals.

After an amazingly interesting career, Frank would eventually settle down with his wife Gertrude and their four children in an old mining town in Sierra County called Downieville where Frank was a columnist writing humorous articles for the Mountain Messenger, a local newspaper. Frank lived out the rest of his days surrounded by his loving family and comforted by the memories and remarkable stories he had accumulated throughout his 96 years on Earth. Frank died in 2002 but this exhibit aims at resurrecting the man known as “Pancho”.