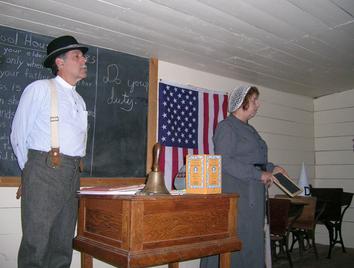 For a typical class, the pupils line up by gender and height before entering the classroom They recite the Pledge of Allegiance to a 45-star flag, practice cursive writing on slates and learn the school rules, such as standing with hands down at their sides when speaking. Their regular teachers prepare them before the field trip so they know what rules they will have to abide by. It’s not uncommon, though, for a boy to stand in the one-room classroom with his shoulders slumped, his hands in his pockets, said Arthur Mate, a docent. All it takes though, is a little reminder that the pupils must stand straight “because a relaxed body is indicative of a relaxed mind,” and pupils cooperate, Mate said. Lessons incorporate practical arithmetic problems and time reading aloud from a McGuffey Reader, a series of books introduced in 1836 and still in wide use at the turn of the 20th Century. Stories in the books usually incorporate a moral lesson. “They’re all stories designed to instill social values,” Mate said. The object of schooling at the time was not just to impart knowledge, he said, but also to train students to become an asset to their community and society at large.

‘New’ words in spelling bee
Wiese tries to make the experience as authentic as possible but has made some concessions.  Children sit on benches instead of at desks, because the society can’t afford to purchase enough antique desks. (A couple are on display in the room.) The Barrington History Museum also had to make some changes in the list of words they use in the spelling bee that takes place at the end of the session. “We learned real fast that we cannot use authentic year-1900 3rd-grade words, so we’ve had to adjust Mate said.

Children growing up on farms in Barrington around 1900 would have known what a “froe” is – a tool used for splitting wood or making shingles – but children today wouldn’t be familiar with the term. Because of that, the Barrington History Museum works with local schools to come up with a list that is a blend of what the children are learning now and what was typical around 1900. Wiese joked that they have two spelling lists, a regular list and a “hit” list, choosing words from one or other depending on how much time they have left for the spelling bee. “If the bus is late, the spelling bee takes a long time,” Mate said, “and if the bus is out there honking and the driver’s on overtime and we’ve got to get the kids out, the spelling bee is over real fast.”

Creating the program
Mate and his wife, Diane are professional re-enactors who serve as docents at the schoolhouse. Charlene Gelber, an elementary-school substitute teacher, joined the staff as a docent this year. The teachers follow a book compiled by Wiese that outlines what school was like around 1900 and offers guidelines on what to cover in the classroom. It took almost a year to do the research to put the guide together, Wiese said.

About 100 pupils came to the schoolhouse last school year, Wiese said. He hopes to see that number jump this year noting that the program could accommodate more than 400 students in a school year. Programs run in the fall and spring. There’s no heat in the schoolhouse so winter programs aren’t scheduled.

Third and 4th-grade pupils get a taste of what school was like around 1900 at the Little Applebee One-Room School House in Barrington. They come to the school house for a one-hour “class” where a docent, dressed in period costume, leads them in a lesson similar to what Barrington children experienced 100 years ago. Run by the Barrington History Museum, the schoolhouse sits behind the Museum’s office at 212 W. Main St. in downtown Barrington. It can accommodate 25 to 30 children at a time, said John Wiese, program coordinator.

An old-school lesson, with many rules Barrington History Museum's program gives pupils a circa-1900 education 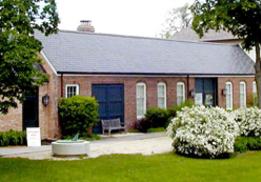